I've been having trouble communicating with my Xbees last week and I thought the problem was bad connections.  In the end it was due to the Xbees configured as end-points and their sleep values set too aggressively.  Sleep settings are worthy of a whole blog entry by itself but this short page will focus on an easy way to debug both ASCII and binary XBee API calls.

The analyzer I used was a USBee-AX that plugs onto the USB port.  At first I thought the unit was defective but you only need two connections to debug the UART's TX/RX.  No need for GND or VCC connections: 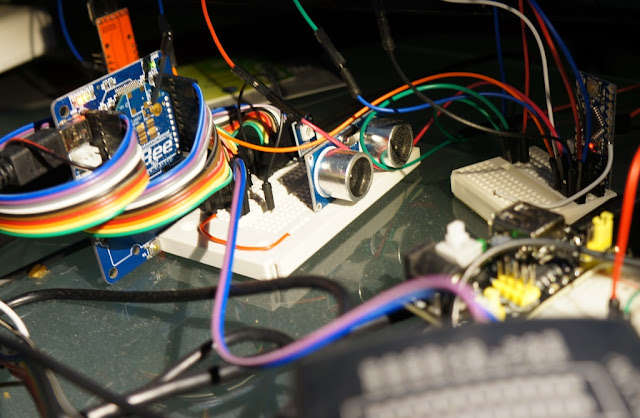 The other missing piece was dialling in the baud rate correctly.  I run my XBees at 115200 and 2 stop bits for various reasons and the USBee-AX needed to be configured the same before data was intercepted by double clicking on the UART section for this dialog box:

The last piece was designating the TX line to be the trigger to start sampling.  You can see that in the final image as the rising edge next in the blue TX box.

I was very surprised to see actual binary bytes after designating line 6+7 as UART.  The section to the right shows the UART communication in-view and syncs such that it always shows the same data as the main window but in more readable form.

This data is actual serial communication at 155200 baud intercepted over a few milliseconds.  As you can
see both the 7E 08 AT commands show up along with their corresponding 7E 88 AT response.

Decoded by the Digi API frame maker we can see this is in the middle of asking for the whole Xbee state and this is the ATNT command/response.  Compare the Packet bytes below with the blue bytes above.

A great tool to debug protocol over physical wires and makes hardware tinkering more debuggable.  The setup showed me right away that there was nothing wrong with my serial transmission which led me down the road to find out the module was just sleeping.